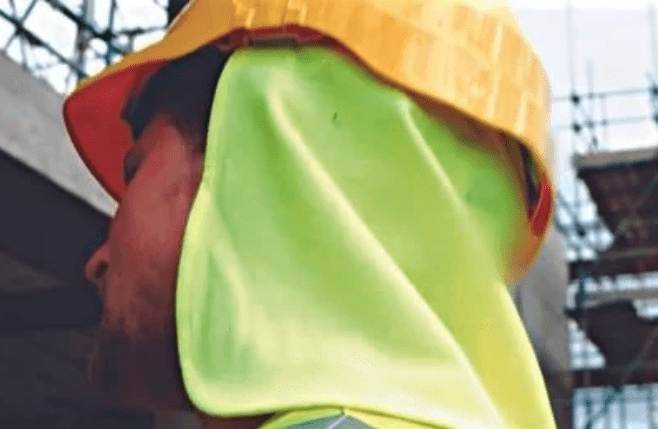 Caution: the sun can blind workers to skin cancer threat

As the UK is in the midst of a heatwave, a leading body for workplace safety and health has alerted employers and outdoor workers to the very real health dangers of getting sunburn.

The Institution of Occupational Safety and Health (IOSH) warns that sun exposure causes 99% of non-melanoma skin cancer and up to 65% of malignant melanoma skin cancer – and yet vulnerable outside workers, particularly those employed in construction, agriculture, maritime industries, road working and rural occupations remain ignorant of the dangers.

For example, research into sun exposure in the UK construction sector, commissioned by IOSH from Nottingham University, showed that two thirds of those working outside for an average of seven hours a day either thought they were not at risk or didn’t know whether they were or not. Nearly 60% of construction workers reported having sunburn at least once in the past year, while 40% thought there was no need to wear sunscreen on a cloudy day (up to 80% of UV rays can penetrate clouds).

Most of those surveyed said they didn’t take measures to protect themselves against sun exposure and neither workers or managers saw sun safety as a critical issue, mainly due to the misperception that the UK climate doesn’t pose a high risk of skin cancer.

Other research, commissioned by IOSH from Imperial College London, found that around 50 people die each year in the UK from skin cancer caused by sun exposure at work, with 240 new cancer cases being registered annually.

“The majority of those affected are men and just under half of those diagnosed with malignant melanoma linked to sun exposure at work are under 65, findings which are echoed in studies around the world, including North America, Australia and Europe,” said Ruth Wilkinson, Head of Health and Safety at IOSH.

“At least 1,500 new cases of work-related non-melanoma skin cancer (more treatable than malignant melanoma) are also registered each year in Britain, with 12 deaths,” she added.

As well as sunburn, Ultraviolet (UV) exposure can also cause premature aging of the skin, a range of vision-impairing eye conditions and weakening of the immune system.

“This heatwave maybe perfectly timed for a holiday but the reality is that the risks to sun-protected holiday-makers aren’t comparable to the risks faced by millions of outdoor workers, who for significant periods of the year are typically exposed to solar radiation for hours at a time, day in, day out,” added Ruth Wilkinson.

“It should also be born in mind that these workers often have long term, chronic solar radiation exposure to particular areas of the body, such as their head, neck, arms and hands, with legs and torso also being exposed on particularly hot days.

“The fact remains that in some industry sectors, the risks still aren’t acknowledged or managed as well as they could be.”

How to manage it

Here’s an IOSH Checklist to help manage outdoor workers’ exposure to the sun – 90% of skin cancer deaths could be prevented if exposure to UV is controlled:

Encourage workers to regularly check their skin for changes such as moles or other skin differences. Detecting the early signs of skin cancer and undergoing early treatment can save lives.

This website uses cookies to improve your experience while you navigate through the website. Out of these cookies, the cookies that are categorized as necessary are stored on your browser as they are essential for the working of basic functionalities of the website. We also use third-party cookies that help us analyze and understand how you use this website. These cookies will be stored in your browser only with your consent. You also have the option to opt-out of these cookies. But opting out of some of these cookies may have an effect on your browsing experience.
Necessary Always Enabled
Necessary cookies are absolutely essential for the website to function properly. This category only includes cookies that ensures basic functionalities and security features of the website. These cookies do not store any personal information.
Non-necessary
Any cookies that may not be particularly necessary for the website to function and is used specifically to collect user personal data via analytics, ads, other embedded contents are termed as non-necessary cookies. It is mandatory to procure user consent prior to running these cookies on your website.
SAVE & ACCEPT
Contact Us